Little’s careful and virtuosic attention to detail makes these spaces, which in someone else’s hands could easily register as staged set pieces, feel real and fully inhabited by people we cannot see.

Willie takes us to another part of his childhood growing up in the rural south, as an imaginative Gay, Black child who just wanted to fit in — to belong — in a world where he knew at a young age he could never really fit in.

This exhibit captures the essence of time through sights, sounds, and aura. Using found objects and illuminating visual narratives, he masterfully brings us to that time, allowing us to walk in the Pactolus Township-worn shoes of his youth in the late 60s, and early 70s in Eastern North Carolina.

In My Own Little Corner – Entrance 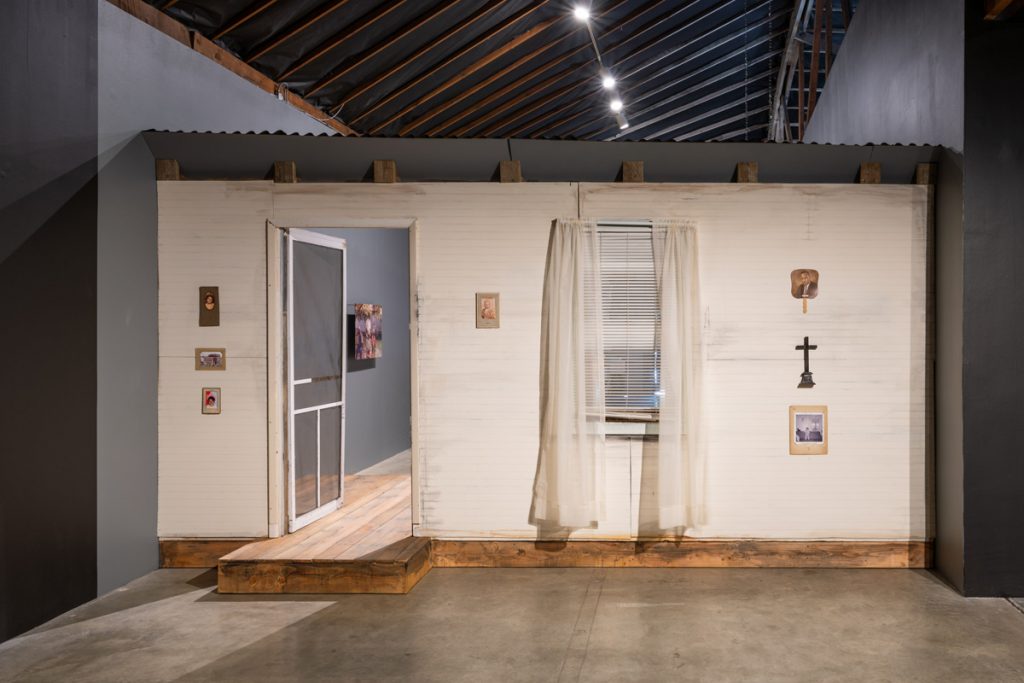 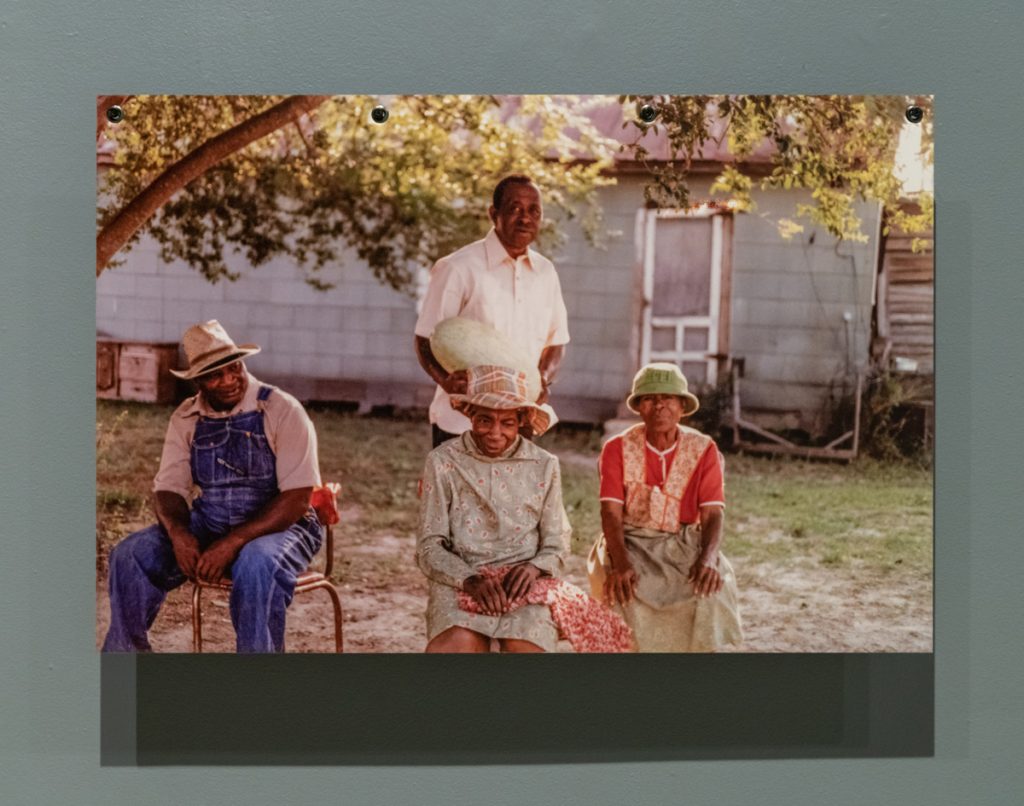 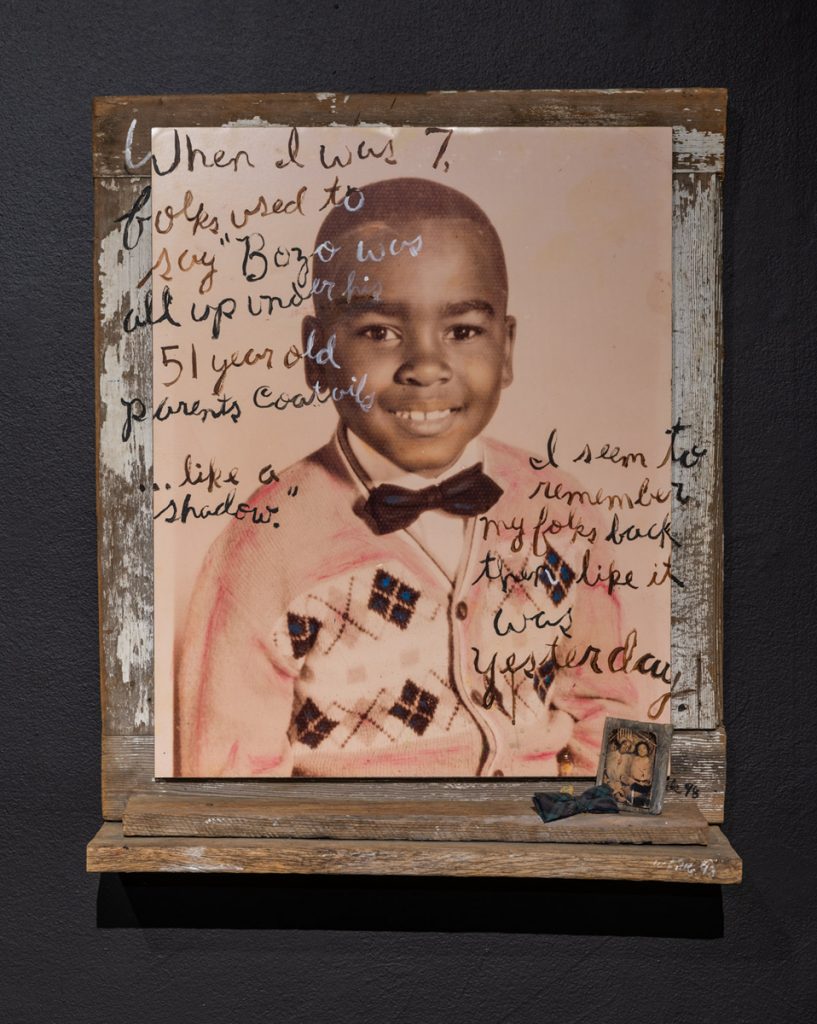 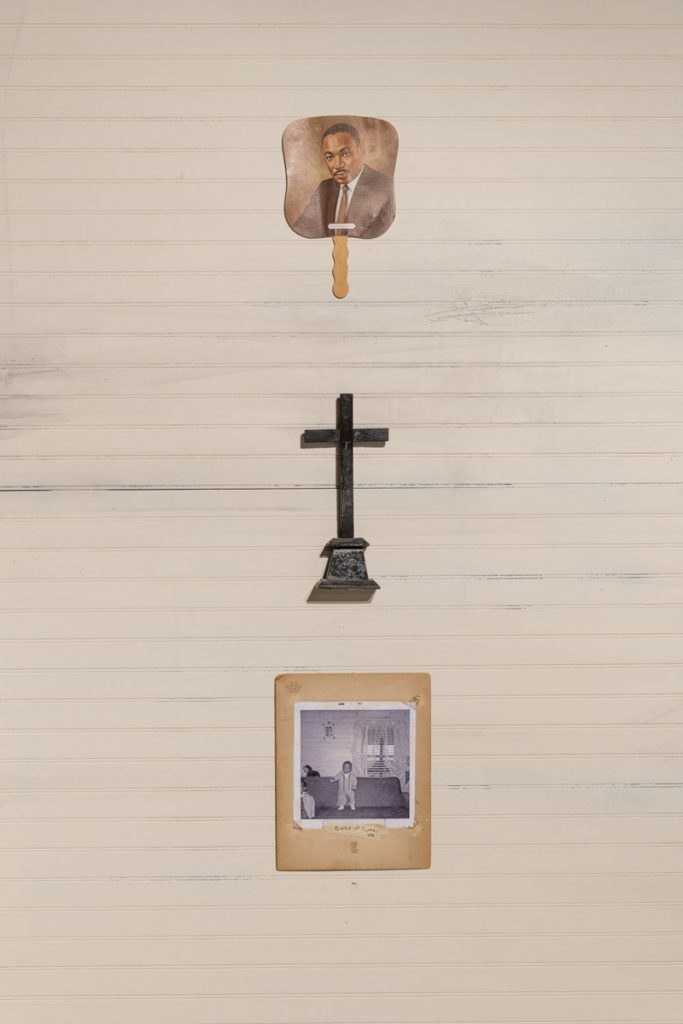 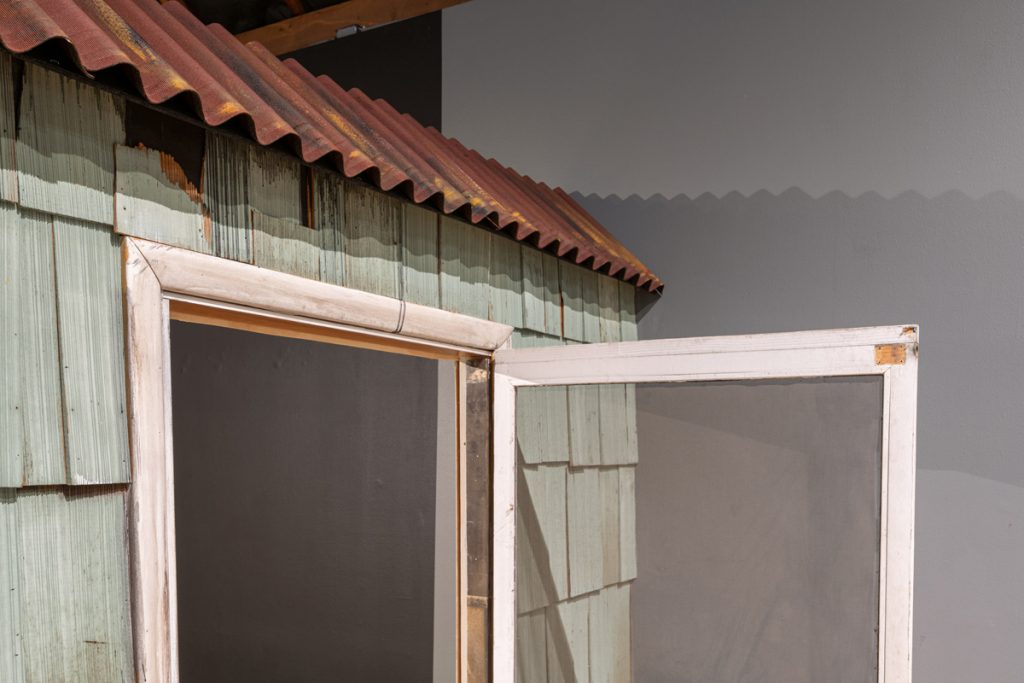 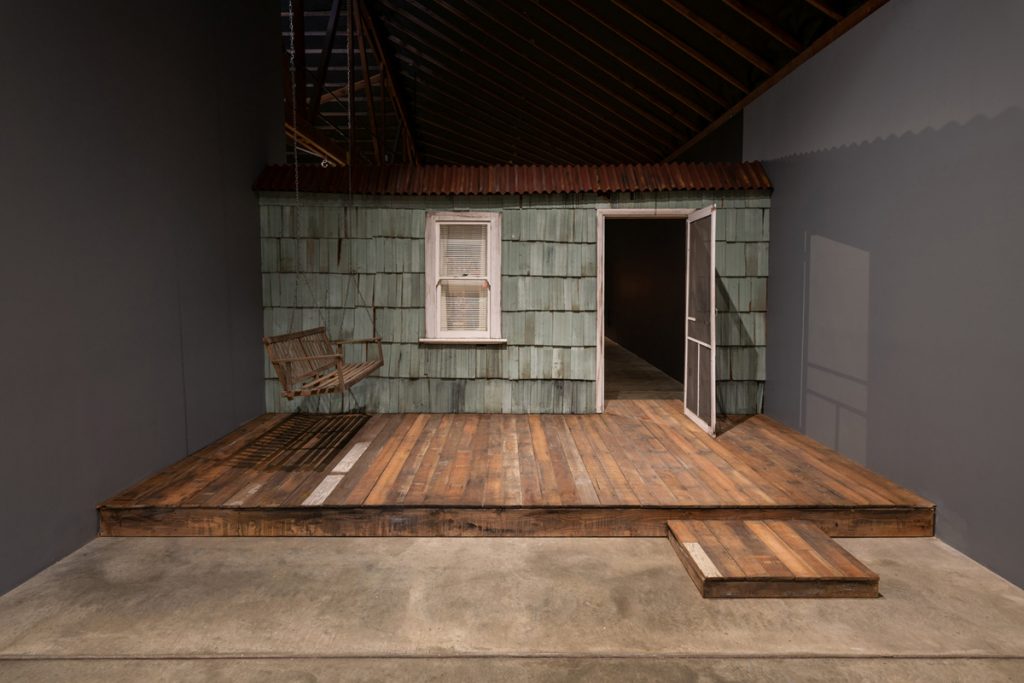 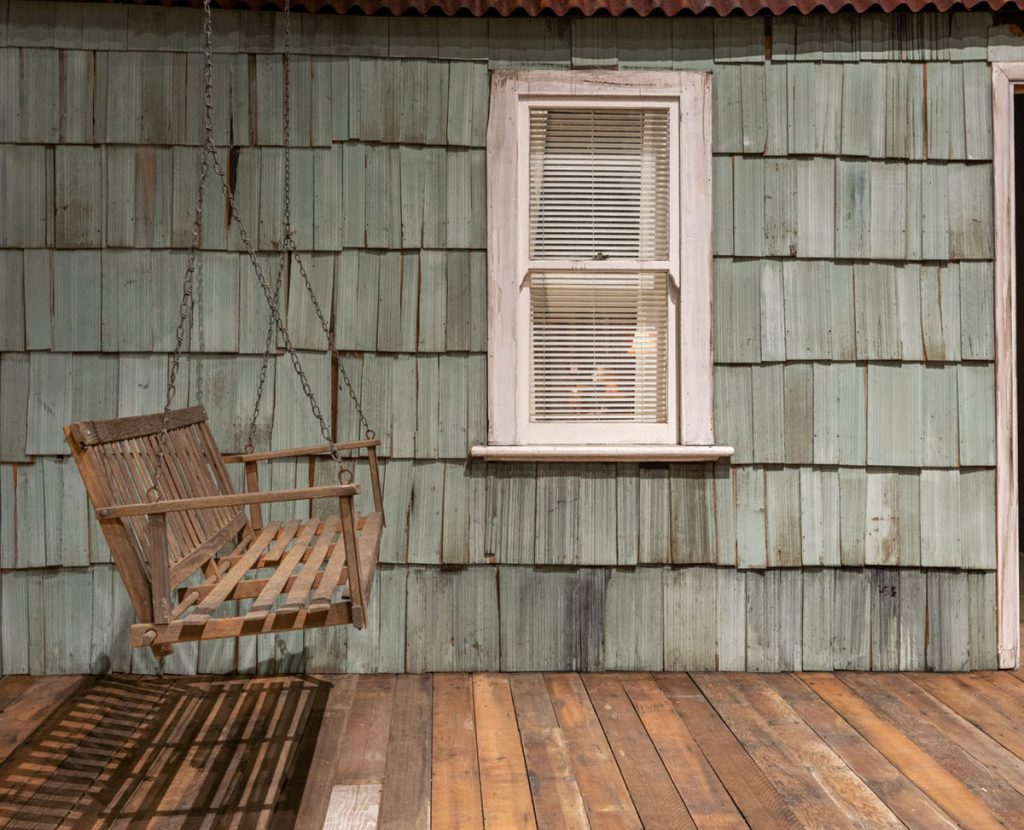 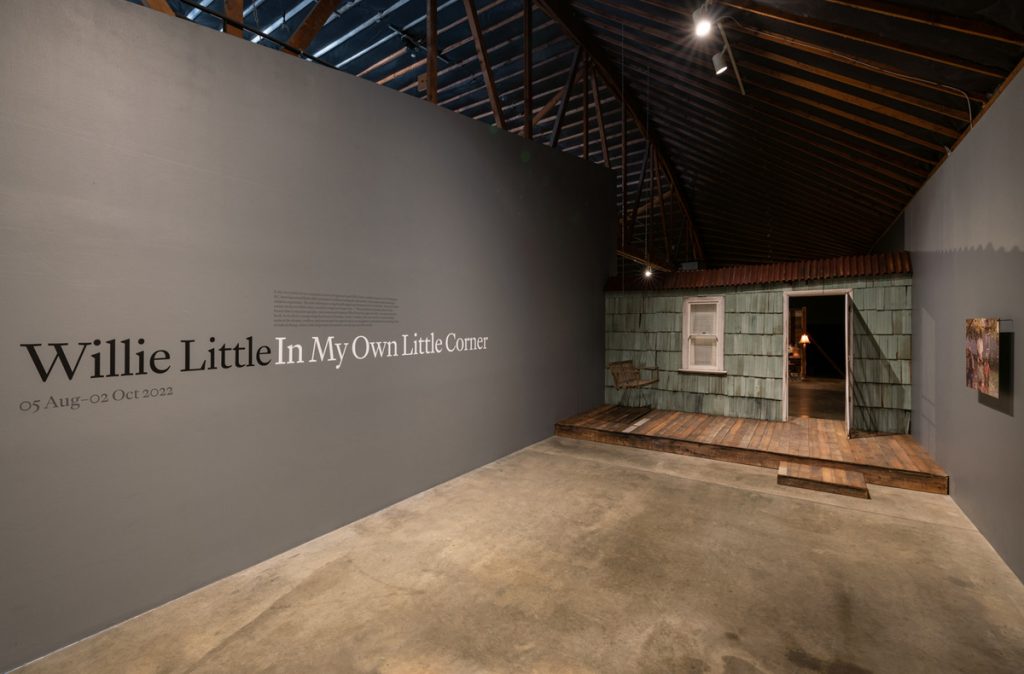 The entrance to “In My Own Little Corner” consists of objects depicting the porch of the ramshackle asbestos-shingled shotgun shack of my youth, circa 1968.

The porch swing suspends from the 20-foot-tall ceiling, creating a surreal sense of reality, to introduce the viewer to a dreamlike world of memories from his childhood.

To the right is a large photograph of some members of his father, Grandma Flora Ann, Great Aunt Rachel, and Uncle Cake, posing in front of our green asbestos shotgun shack, on a summer day, circa the late 1970s. These elements all combine to set the tone of where he comes from.

In My Own Little Corner – Bedroom

The second vignette is the corner of my bedroom, where, at the foot of his bed, sat a heater, 2 wardrobes, and a 19-inch, Philco black and white TV on an aluminum stand on wheels.

It was a place where Willie would imagine the wardrobes and heater were part of the Manhattan skyline at the foot of my bed.

The television was where, through his vivid imagination, he traveled around the world through 60s and 70s TV. The set plays excerpts, or the opening themes from that era’s TV shows Julia, Family Affair, and Bewitched, on a repeat reel.

Objects transport the visitor to a time, and place familiar to some, but new, especially to a younger generation.

The objects include a working, vintage late 60s television, a Jesus fan, a 5th-grade class photo, an image of Diahann Carroll, as TV’s Julia, the first Black non-stereotypical role on TV, period, and an assortment of period objects, books, and toys. 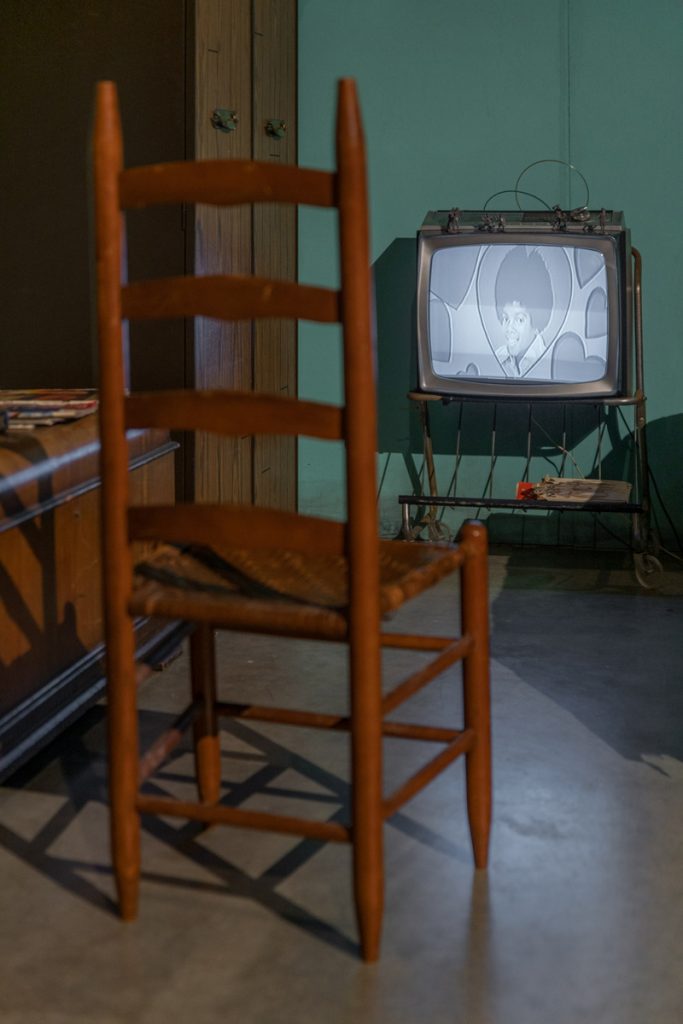 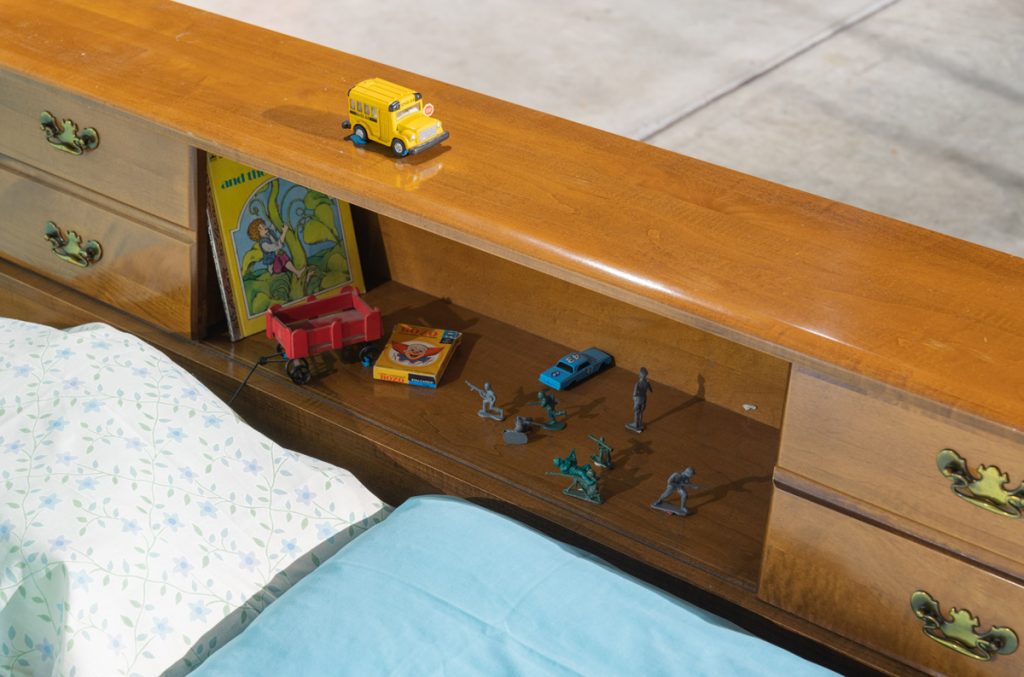 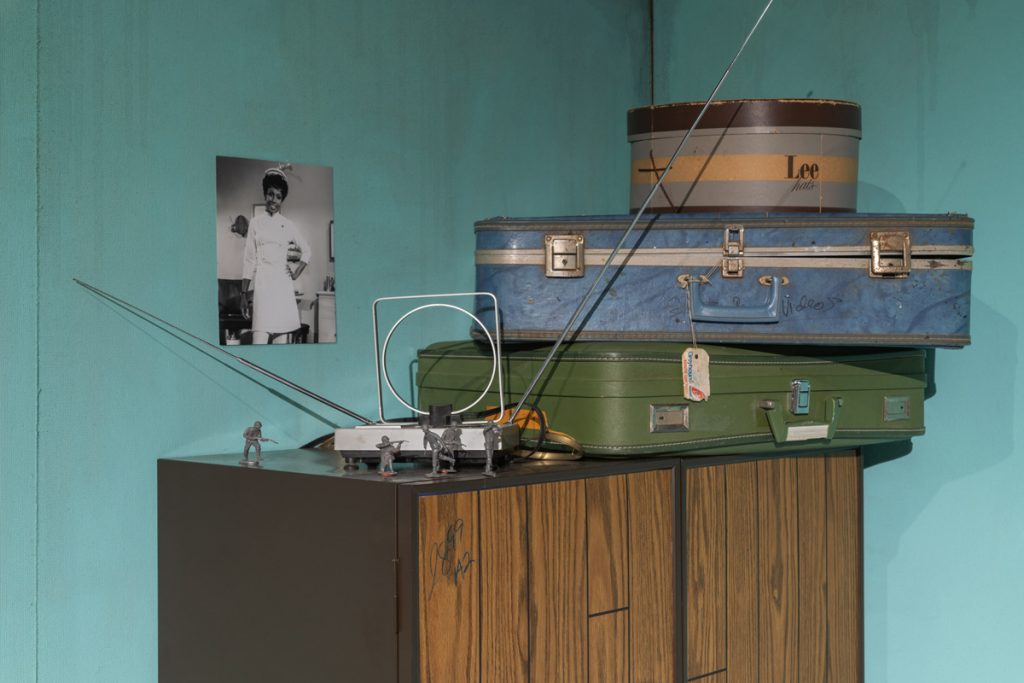 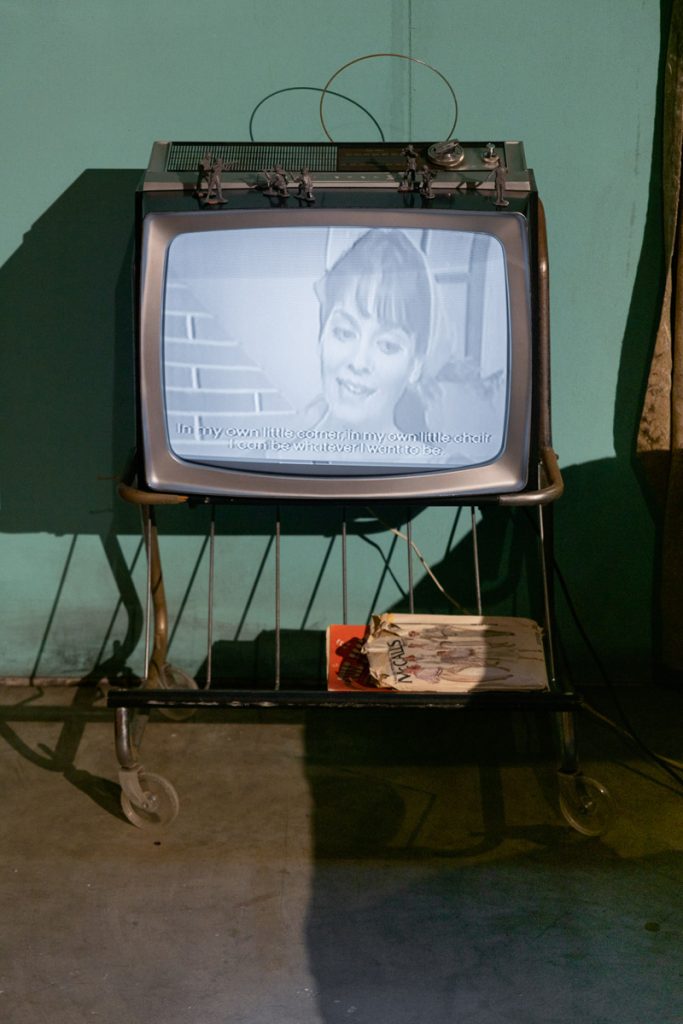 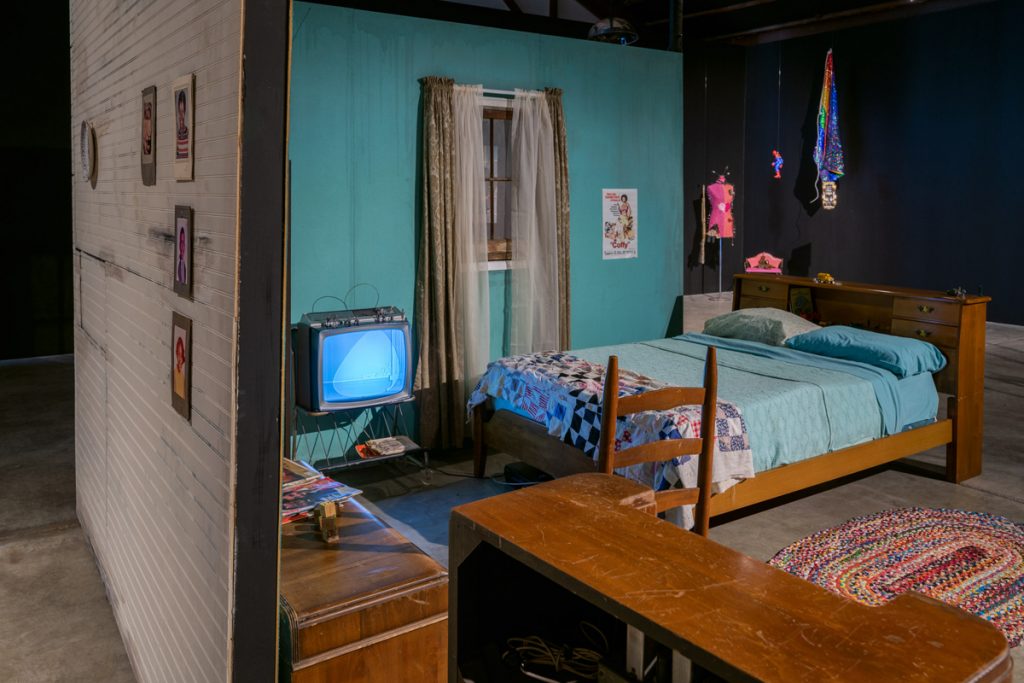 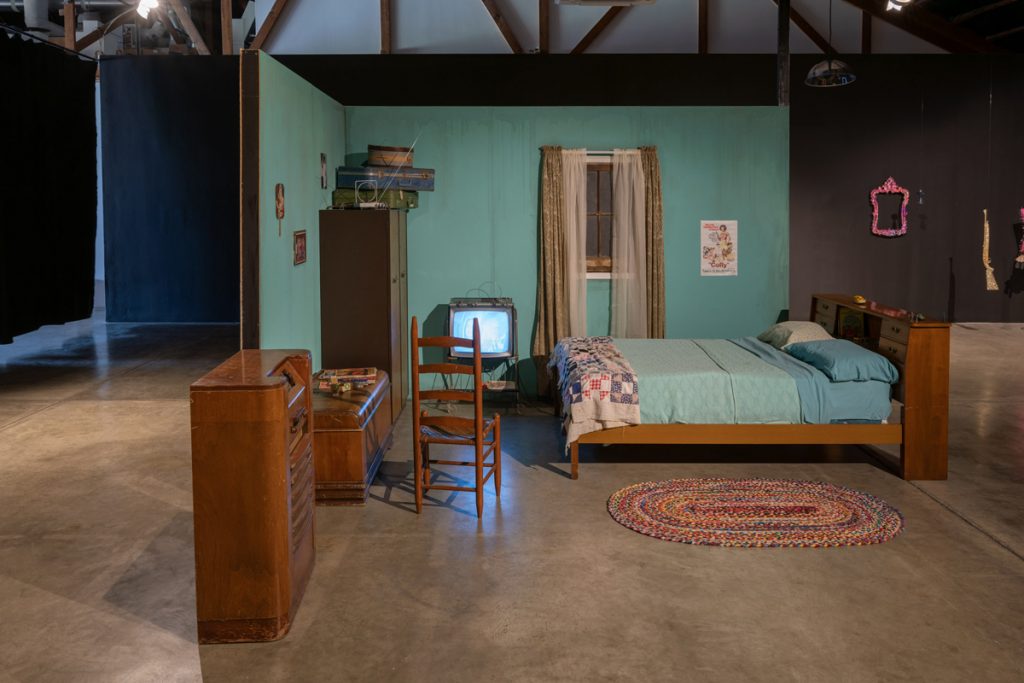 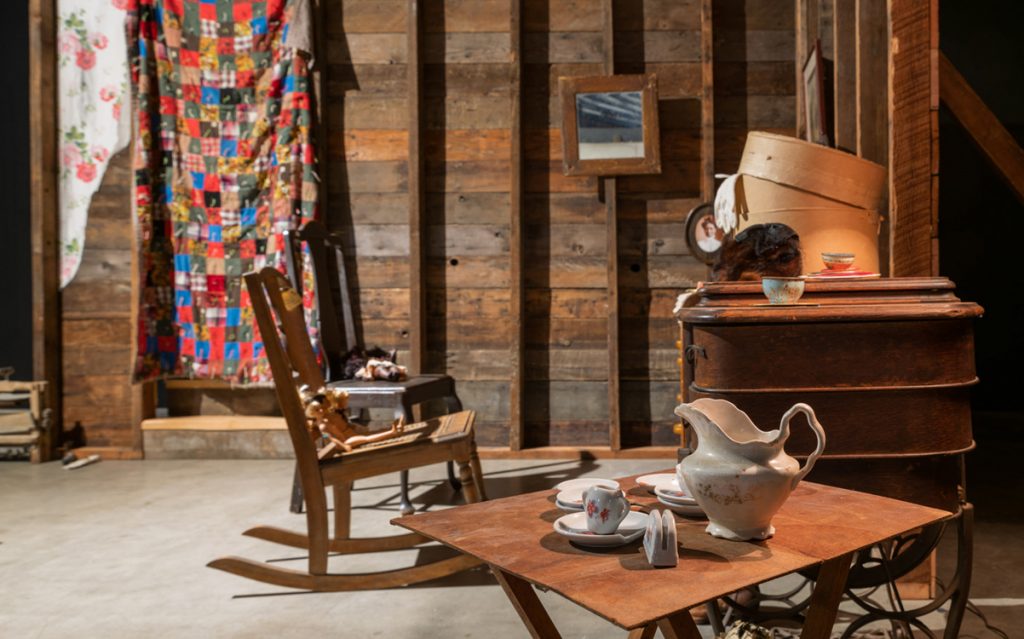 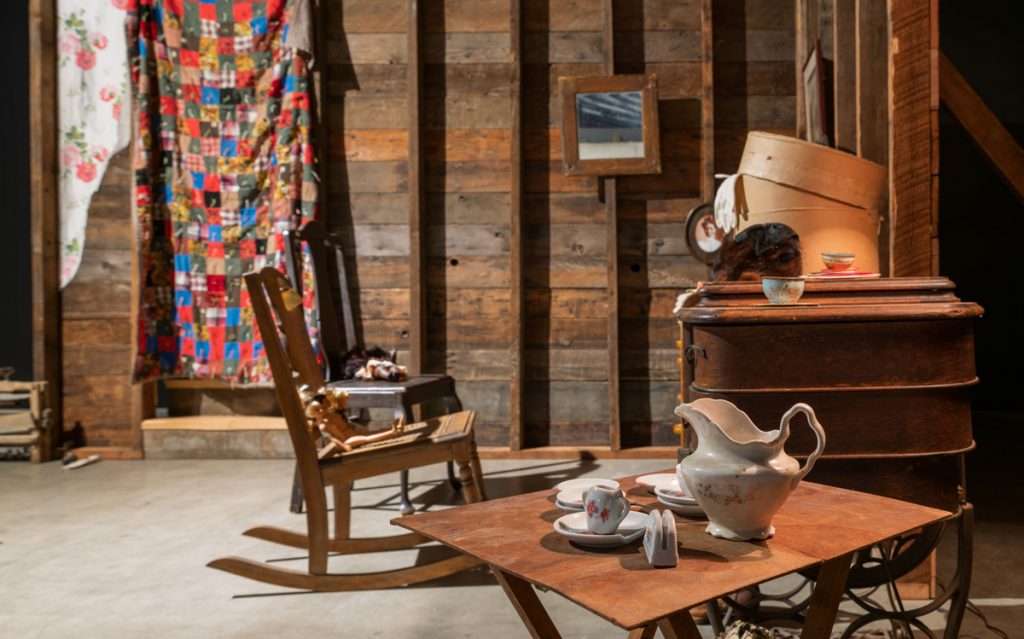 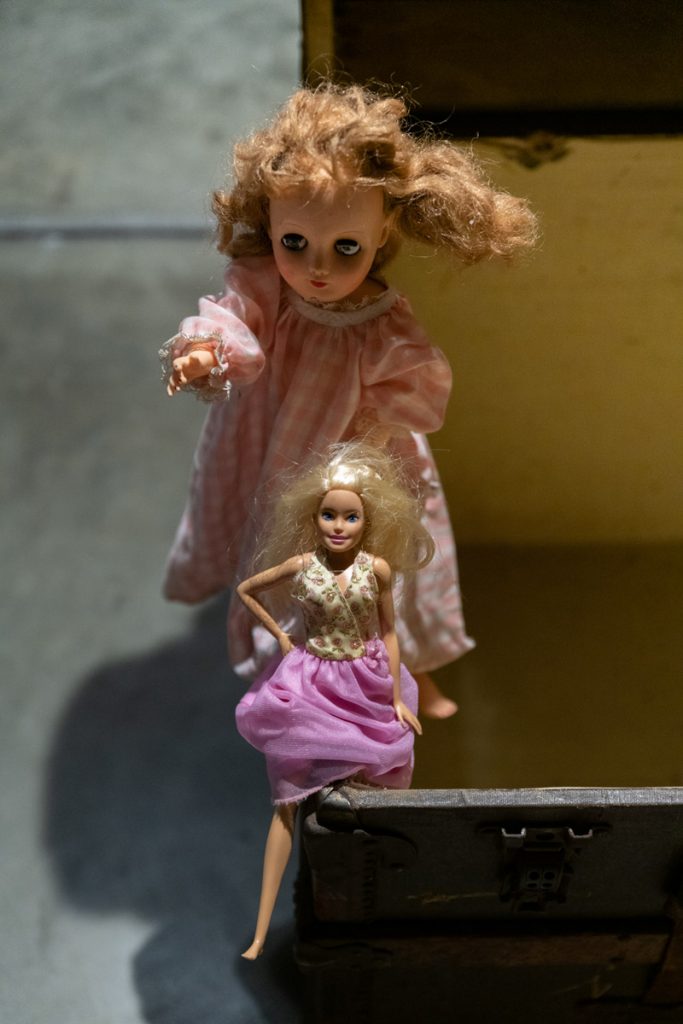 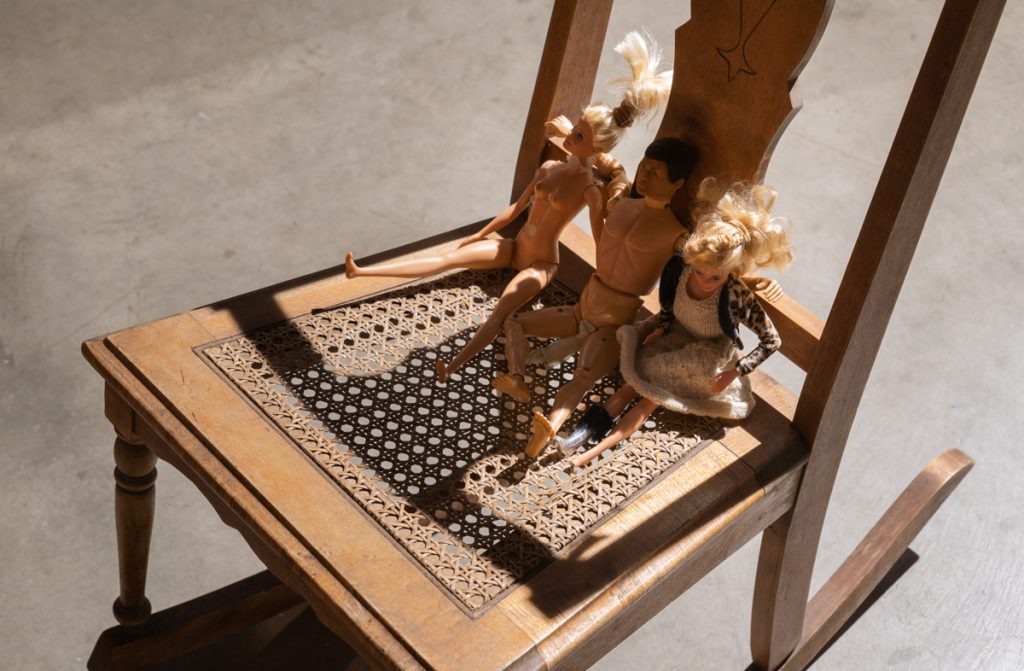 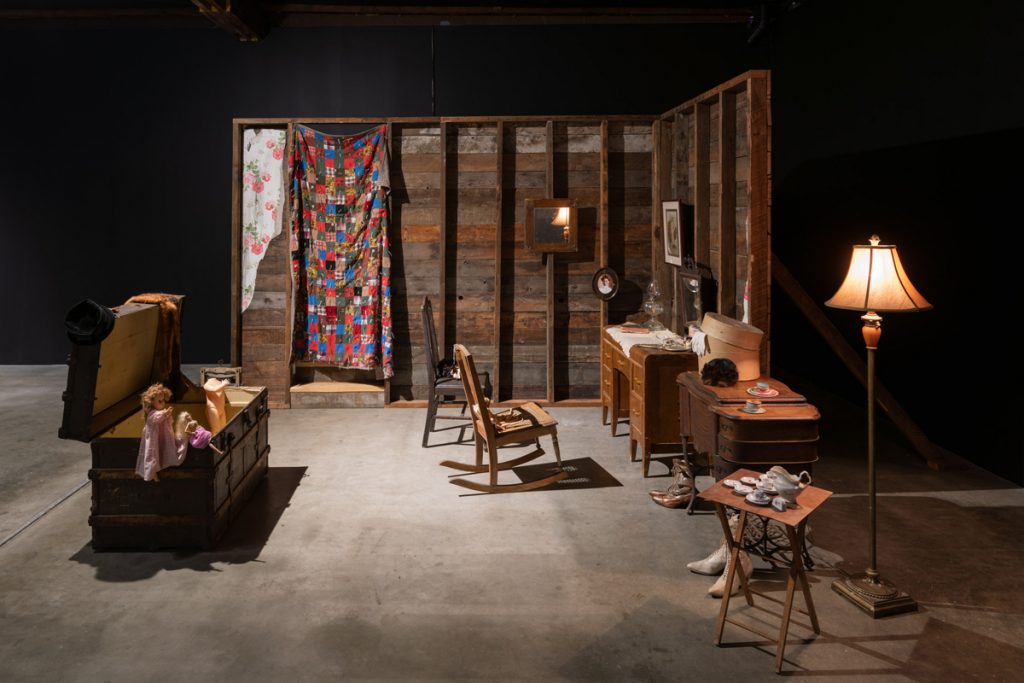 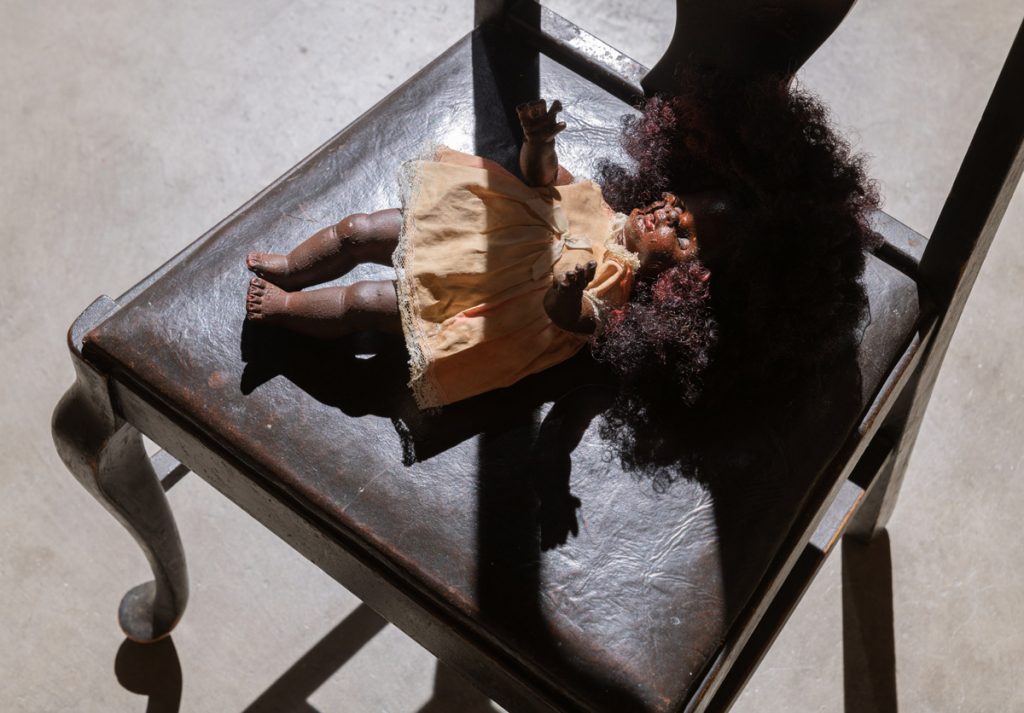 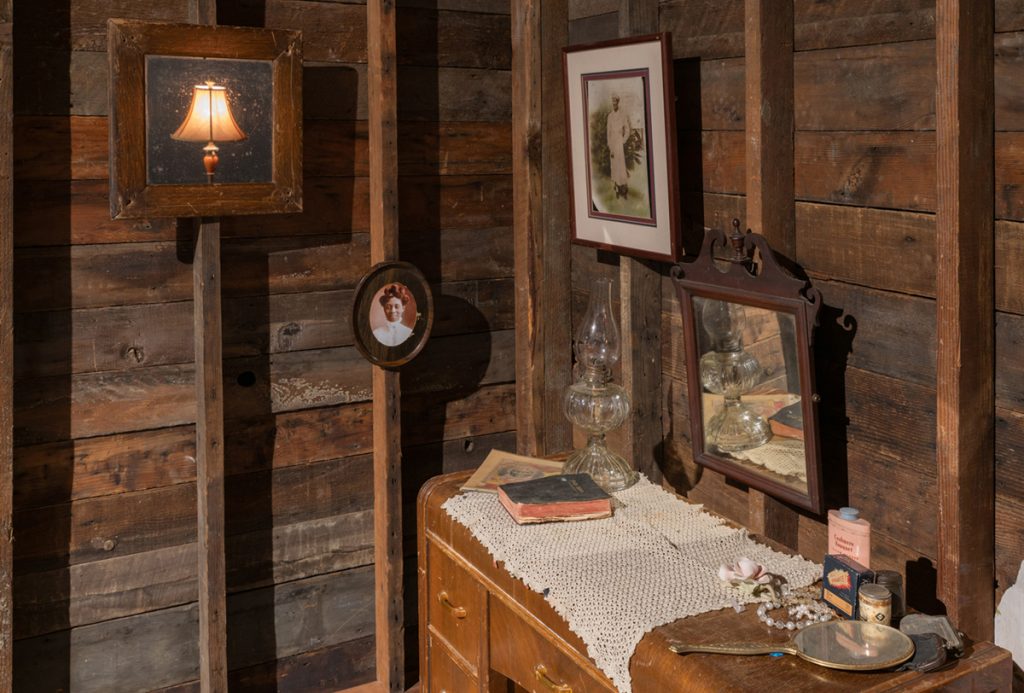 This vignette represents a clandestine place, where his sister and he secretly played dress-up, as ladies of the late turn of the century (the early 1900s); played “Girl,” at his Grandma Flora Ann’s house after church on Sundays.

They eventually amped up their secret game to create detailed movie scenes/ sagas. Their Barbies and GI Joe’s became 60s and 70s movie stars, Raquel Welch, Tony Curtis, Ann Margaret, and Rock Hudson.  This was a secret that his sister never revealed to a soul.

In My Own Little Corner – The Reconciliation through art making

A vignette of toys suspended from the ceiling evokes a swirling, dreamlike aura within the space.

In his idyllic childhood, boys could openly play with baby dolls without ridicule.

Beside the doll are tobacco sticks, used to tie ripe, yellow tobacco onto, allowing it to “cure” in tobacco barns of my youth, in Eastern North Carolina. The sticks placed intermittently beside the toys hover, moving slightly, giving the allusion of pendulous chimes.

The sound effects of chimes ringing within the audio track, from one of the three corners in the installation, indicate a narrative from another vignette will begin.

The stories, lifted from the pages of my memoir, In the Sticks, expose the often-untold stories from a Rural, Black, gay child’s perspective, but also reveal the universality of the inner turmoil many gay children experience.

Included are images taken from a vignette adjacent to the mobile, consisting of an image of me as an adult in drag for the first time since I played “Girl” with my sister when we were children. Also included are objects representing my adult self as an artist, defiantly claiming all that I am, with pride, and no shame of who I am, and who I have become. 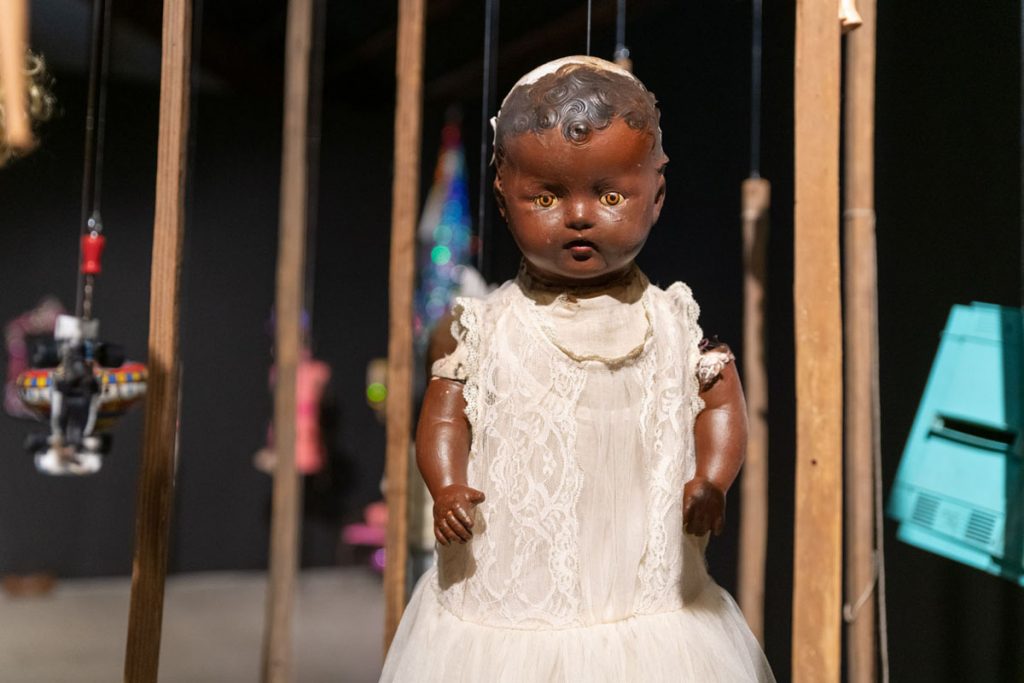 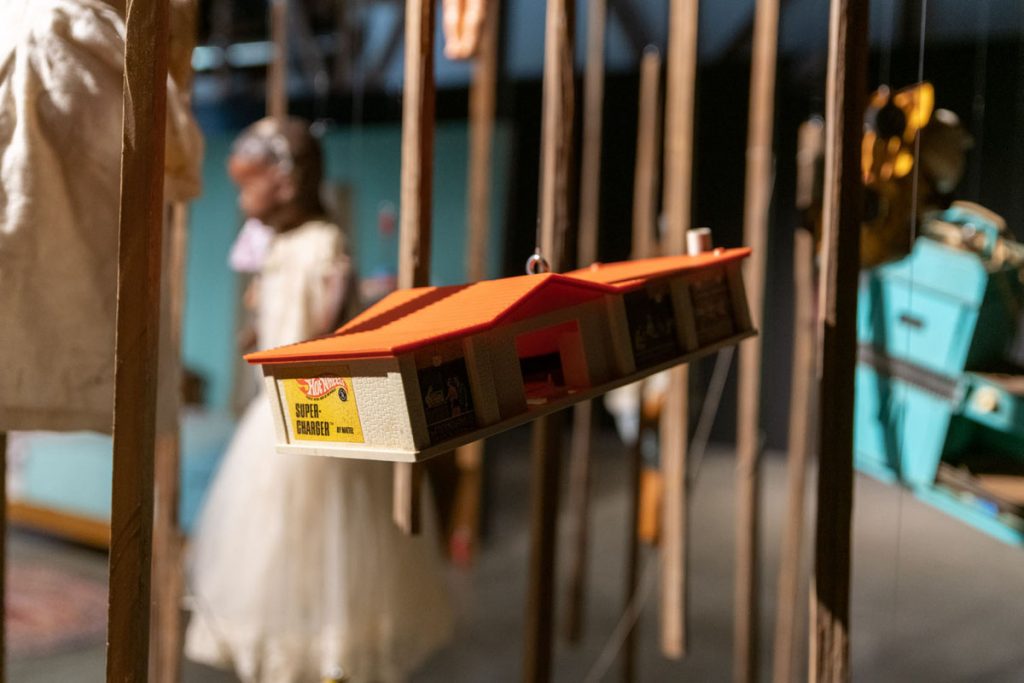 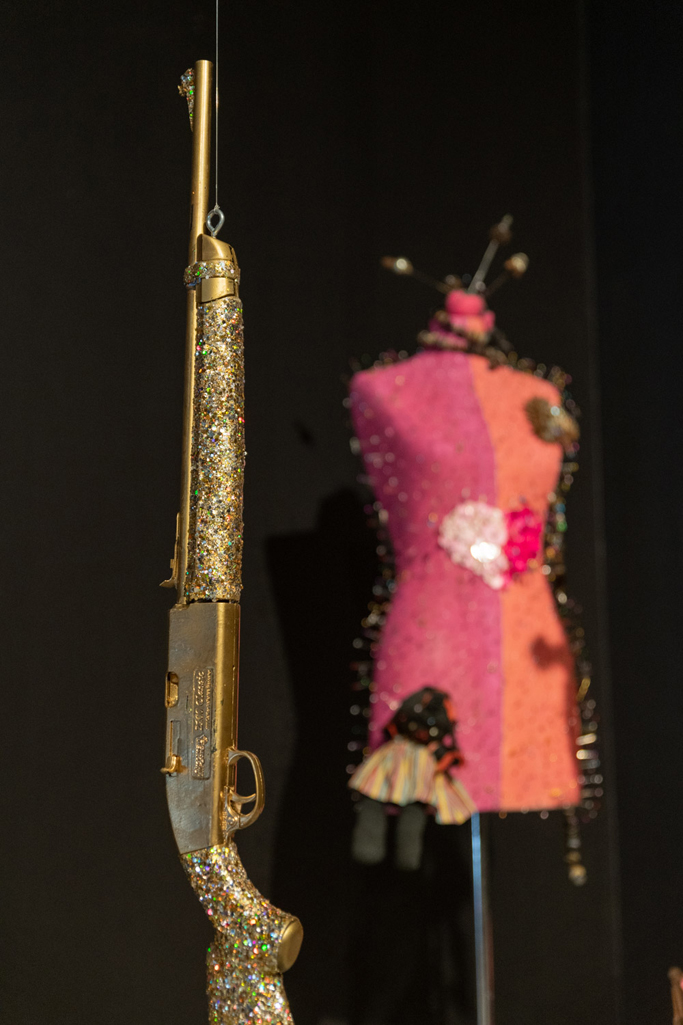 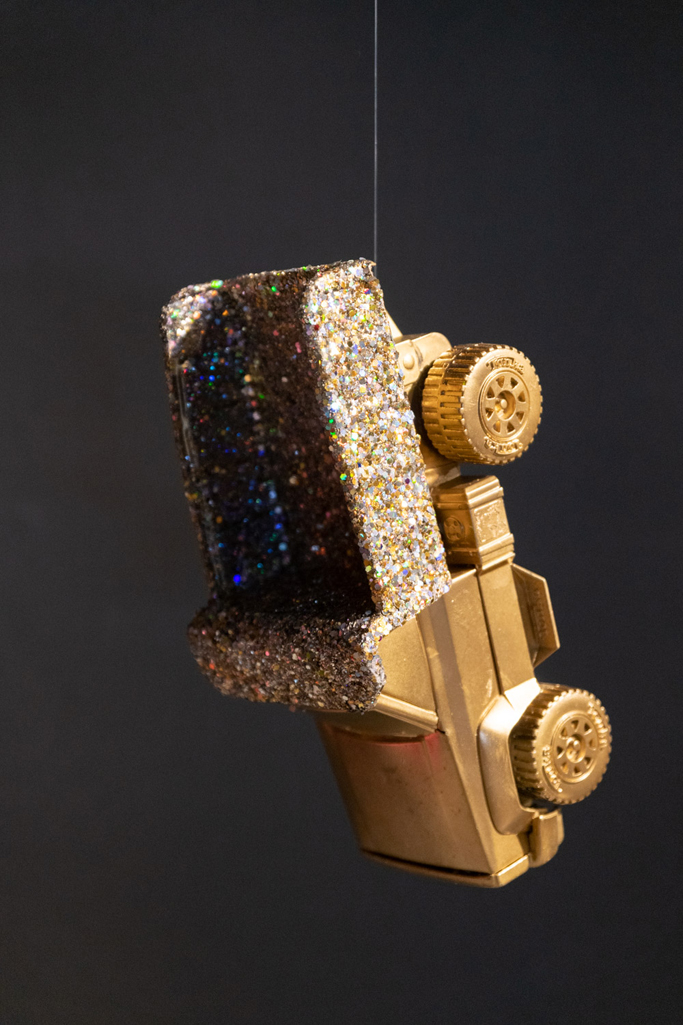 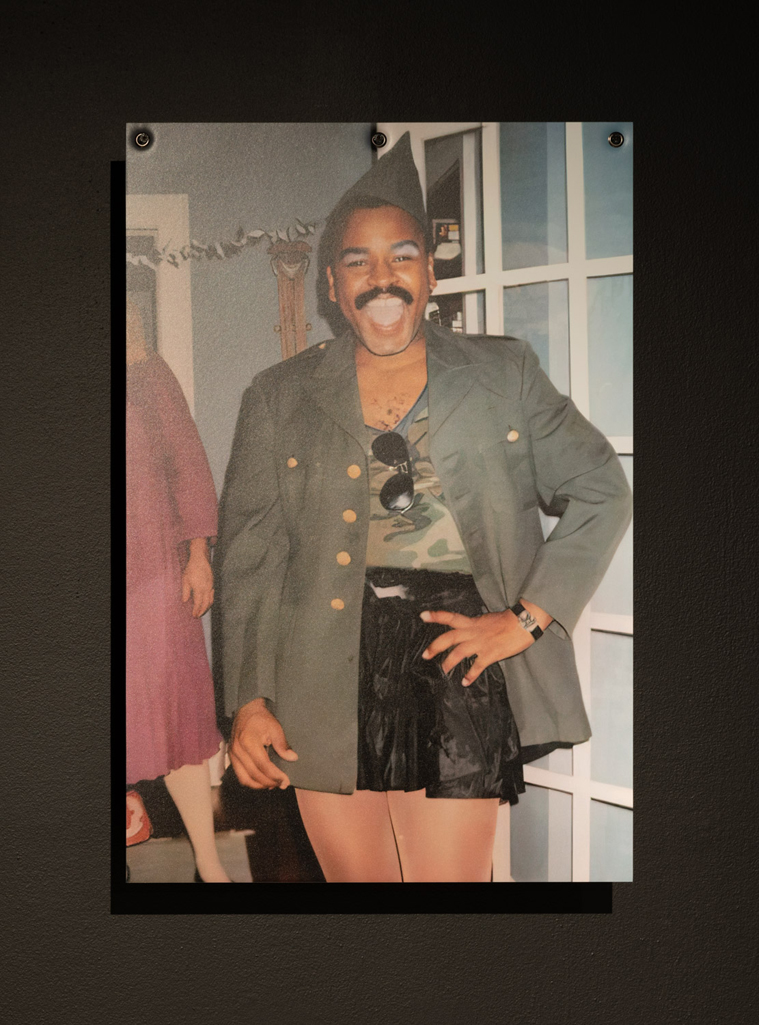 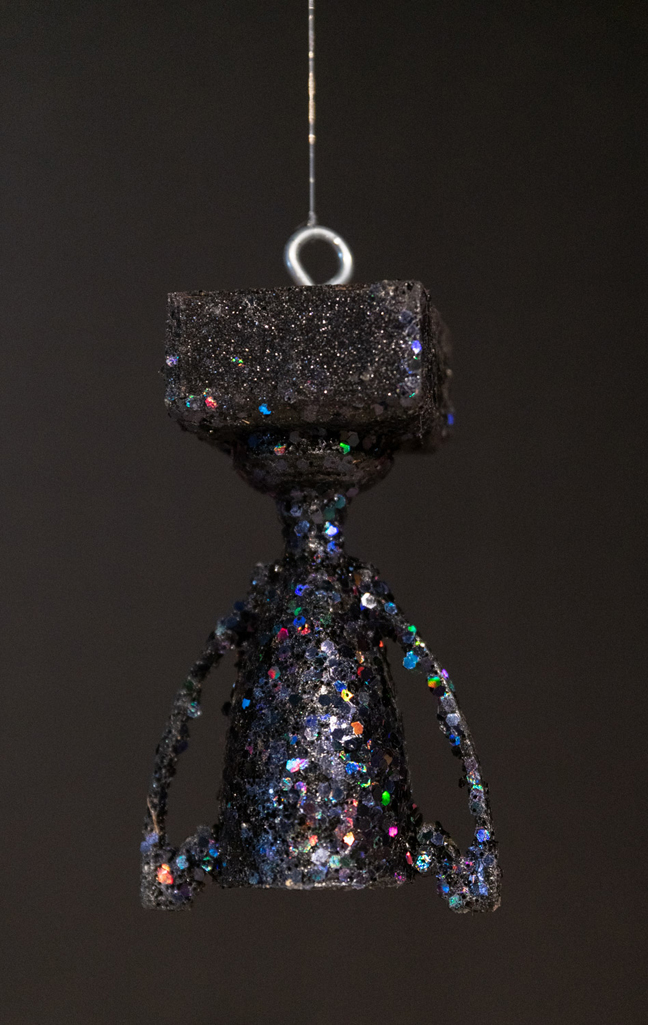 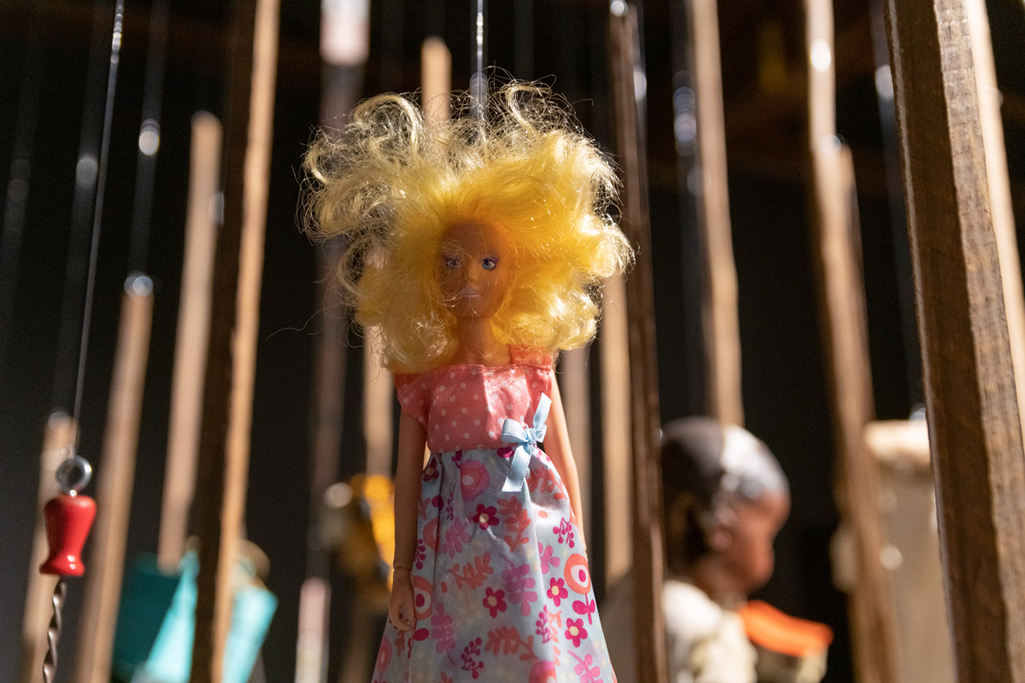 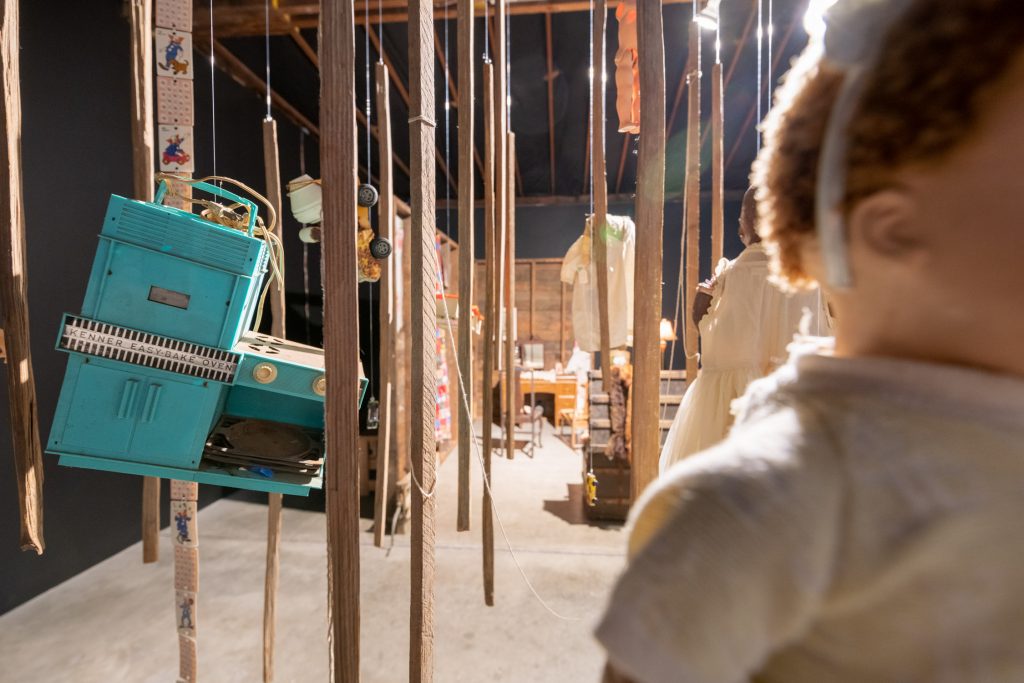